This project aims to provide a listing of Baring-Gould's library, both the volumes preserved in Devon and the extensive collection of popular literature that he amassed to support his research into folk songs, most of which is no longer in his library.

As can be seen, changes in the location of collections mean that individual items will not always be accessible. It is strongly recommended that locations are contacted in advance, preferably by email. In many cases an alternative copy of printed items can be located in other libraries through such sources as JISC Library Hub Discover or other on-line library catalogues. An excellent recent article by Martin Graebe, "Sabine Baring-Gould's library: past,present and future" can be found in the Transactions of the Sabine Baring-Gould Appreciation Society, vol. 13 (2013), p. 48-54.

The records are currently held on a series of Access databases. There is currently a total of 10559 records. Of these 5901 are for the library collections and 4658 for the broadsheet items (3572 for the British Library, 487 for the National Library of Wales, 345 for the Devon Record Office and 254 for the John Rylands Library). Inevitably there is some duplication, where the same item is held in a number of locations. For some collections only items by or about Sabine Baring-Gould have been listed and then not always exhaustively. The entries in these listings have been derived from a variety of sources and not wholly from personal examination. There have been a number of indexes of songs and ballads compiled from the volumes of popular literature, notably by Steve Roud for the English Folk Dance and Song Society, but the aim of the present listings is to reconstruct a bibliographical record of Sabine Baring-Gould's library. There are a number of conventions adopted which may appear idiosyncratic but reflect in part the diverse sources from which records have been taken. For the popular literature capitalisation of titles has been standardised, mainly because many titles are wholly or partially in upper case. On the other hand capitalisation of the imprint has been retained where possible as it may assist in identification of variants or assist in dating. Publication dates have been taken from the item where possible or from previous cataloguing or from known dates of activity of the printer. Formats for 19th century items are indicative of size rather than strict bibliographical format. An uneasy compromise has been adopted for sheets which contain more than one song. Where more than one imprint is present the two halves of the sheet have normally been treated as separate bibliographical entries with a link to the other half of the sheet. Where there is no imprint or only one, the sheet is treated as a single bibliographical unit, the items being listed in the order in which the titles appear on the sheet. Where possible first lines are indicated in the same order as the titles of the songs. For books, where entries are taken from short-title listings and access to the originals was not possible, attempts have been made to fill out entries and identify editions from union catalogues such as COPAC. Where this is particularly speculative, query marks have been used. Not all sections are complete. This is particularly true for the broadsheet listings.

Background to the library

The survival of a substantial part of the library of the Baring-Gould family, and more particularly that of Sabine Baring-Gould is little short of miraculous, given the patchy history of Lew Trenchard Manor after the death of Sabine Baring-Gould in 1924. The house passed to his son Edward, who only lived there until the death of his wife in 1931 when he emigrated to the United States. In January 1937 there was a sale of surplus furniture and books - 2,000 went in a single lot for only £8.00. The house was let and during the war was taken over by the Army. After a few years of neglect the Painter family opened the house as a hotel in 1949. Their successors Sue and James Murray continued to run Lewtrenchard as a hotel for 15 years until it was leased by the von Essen Collection in 2003. The Murrays returned in 2012 after the collapse of the Von Essen Group.

The library was too large to fit comfortably into the hotel and it was difficult to provide adequate security. In the 1970s a solution was found when the Acland family ceased to live in Killerton and moved with their books to Sprydon. Faced with an empty library room when the house was to be opened to the public, the National Trust were happy to line the walls with Baring-Gould's library. The bulk of the library was packed up and sent to Killerton where the most presentable items were selected by the recently retired City Librarian of Plymouth, William Best Harris. The books were roughly sorted, placed on the shelves and a brief listing provided. They were protected from casual handing by being placed behind fishing wire and were regularly cleaned by volunteers, so they were well cared for. Damaged books and family papers were relegated in some thirty boxes to the basement at Killerton until they were passed to the Devon Record Office for safe keeping in the 1990s. More recently, in 2010, the folk song manuscripts and collections of popular literature were also passed to the Devon Record Office, now known as the Devon Heritage Centre.

In 2011 the National Trust wished to use the library room for a collection of books which could be handled by their visitors. They had not been able to provide the means of making the Baring-Gould Collection properly available to researchers and, having doubts about its relevance to Killerton, asked that it be removed. The collection was once more at risk, but fortunately the University of Exeter stepped into the breach and it is securely housed in the library's special collections room. Recataloguing is now substantially completed and there are upgraded entries on the on-line catalogue (direct link verified November 2018).

A significant proportion of the library remained in various parts of the hotel without any listing of what was available but the items have now been pulled together and an integrated listing of the collections in all three locations is nearing completion. In 2018 David Shacklock's significant collection of books by and about Baring-Gould was deposited in Lewtrenchard Manor. Listing of this is well advanced and records will be integrated with the main union listing.

Sabine Baring-Gould had disposed of various items during his lifetime. He donated various of his publications to Plymouth Public Library and most of his collection of broadside ballads and a number of Icelandic sagas have ended up in the British Library. His children also took volumes with them when they left Lew and these may include some of Sabine's books. At various times items have been disposed of to make space, but care has been taken to retain those with bookplates.

Until 1931 the collection had grown with the Baring-Gould family and reflects its interests. The house at Lew had been in the family since 1626 when the manor was purchased by Henry Gould from Sir Thomas Monk who had fallen into financial difficulties and was put in the debtor's prison in Exeter. The Manor can be traced back to the Domesday Book of 1086 when it belonged to one Roger de Moles. In the reign of Henry III it was in the possession of the Trenchard family, from whom it passed to the Monks of Potheridge by marriage.

Henry's brother James was Mayor of Exeter and was a Royalist during the Civil War. He had two sons, James and Edward. James, the elder one who died in 1680, was a merchant trading with China. Probably during the 1660s repair work was done to the house, which was continuously occupied by the family into the 18th Century. In 1736 William Drake Gould inherited estates at Pridhamsleigh in Staverton. He pulled down a portion of Lew and went to live at Pridhamsleigh.

There seems to be no evidence of the book ownership of any members of the family up to this time.

William Drake Gould married Margaret Belfield and they had two children, Edward and Margaret. Edward, known as "the Scamp" was a compulsive gambler who became involved in a murder charge which proved very costly. He paid his debts in land and was left penniless dying few years later. There are several 18th century items in the collection that bear manuscript annotations which identify Edward and Margaret junior, some dated 1762.

Margaret, Edward's mother, then came to live at Lew and ran the estate with great ability until her death in 1794. Margaret's daughter, also named Margaret, married Charles Baring, a brother of Francis Baring, the founder of Baring's Bank in Exeter. Charles and Margaret had a son, William, and the older Margaret left Lew to that grandson. In 1795, he changed his name to Baring Gould at his Grandmother's request but had none of the love for Lew that his grandmother had. He was always short of money and tried various commercial enterprises to keep himself and his family solvent. William's book label is present on a large number of titles, particularly French literature published in the late 18th and the first years of the 19th centuries to about 1816.

His son Edward inherited Lew but neglected the house. He took his wife and family including the young Sabine Baring Gould on a nomadic existence around Europe and spent as little time as possible in Devon. There are manuscript inscriptions and a book label which identify his ownership and he appears to have been collecting until about 1833

Sabine was born in 1834. His childhood wanderings around Europe gave him no formal education. He inherited Lew in 1872 and, although he did not live here for another nine years, he started work on the house immediately. When his uncle, who was the vicar, died in 1881, he returned to Lew to take up his living, remaining there until his death in his ninetieth year in 1924. He added substantially to the library, the contents reflecting his varied interests, church history, archaeology, popular culture, travel. It was here standing at an upright desk that he produced many of his writings, novels, guidebooks, sermons, collections of folk-songs, running to a total of several hundred titles.

As his many children grew, their interests were also reflected on the library shelves, particularly in works of fiction by contemporary writers, with a good representation of American publications.

In recent years the interest in the collection has grown, particularly through the work of the Wren Trust and Martin Graebe in bringing the folksong material to a wider public. The family has alo shown a great enthusiasm to keep the collection intact to reflect the life and work of a man who at one stage had more titles to his credit in the British Library catalogue than any other writer.

The earliest bookplate found in library collections appears to be that of Edward Gould (1740-1788) known as the Scamp. It is found on some early 19th century items, so supplies may have also been used by Edward Baring-Gould. 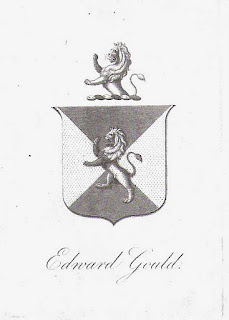 His son Edward (1804-1872), known as the Silver Poplar, inscribed his name in manuscript on a number of volumes at Lew, before using a letterpress book label. He also used a card with his named engraved in gothic lettering. 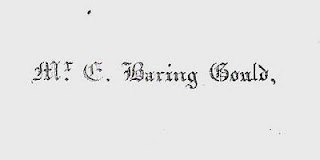 Edward's son Sabine (1834-1924) designed a heavy armorial bookplate which is found in many books in the collections. The design was taken over by his son and grandson. 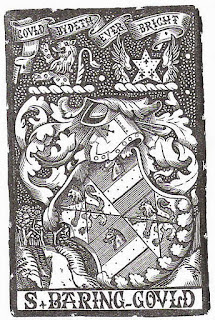 Sabine's son Edward Sabine (1871-1957) married Marion Darragh Linton whose ownership marks are also on many items in the collections. 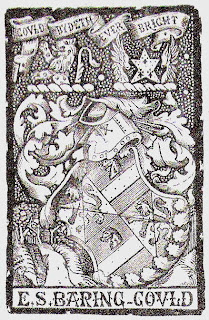 Edward Sabine's older son Sabine Linton 1902-1972 used his grandfather's design, as well as having a new design engraved which was also used by his brother and sister. He also used a design featuring transport. 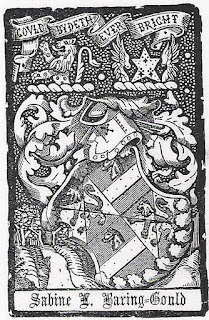 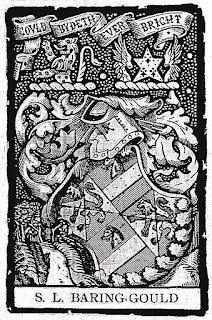 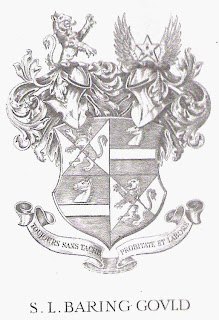 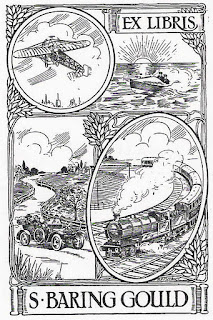 His brother Edward Darragh, known as Teddy (born about 1903) used the family coat of arms and also designed a pictorial bookplate of his own. 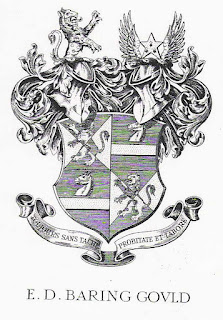 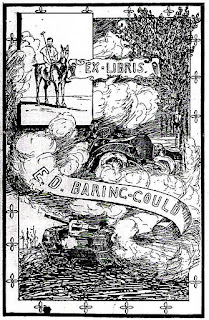 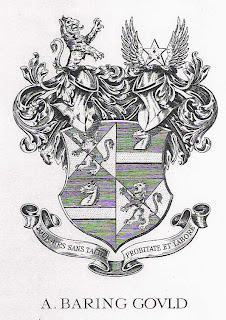 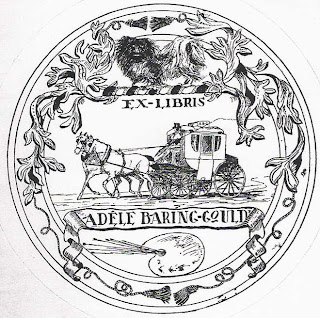